A Haunting in Minnesota Part I: Now I Lay Me Down to Sleep

This particular true ghost story has haunted me most of my life--ever since my dad related it to me years ago, when I was a young boy. Honestly, I've been hanging on to this one, holding back a bit in a desire to do the story justice. This one is a legend in my family and happened to my dad and his older brother, Dale. I've decided to break the story into two parts, beginning with my Uncle Dale's experience.

The year was around 1965-66 in the small mining town of Coleraine in northern Minnesota, where my dad and his brothers grew up. At this point in time, my dad, Ken, was at or around eighteen years old, and preparing to head out to Idaho for college. As the youngest of four boys, he would be the last one to leave the nest, and was living in the house alone with his mom at the time--his father having passed away recently.

On this particular night, Ken and his mother had gone to visit a relative in a neighboring town and decided to spend the night there. Ken's older brother, Dale, had decided to come home for the weekend and arrived to find the old family home in Coleraine to be empty. This was nothing strange or out of the ordinary, and he figured he would be sleeping alone in the house that night. He was wrong.

Growing up as kids in the older house, the four boys all shared a bedroom in the attic and all of their beds were still up there. To access the attic bedroom, one opened a door at the bottom of a long flight of stairs. At the top of the stairs was a window and then a right turn which would take one directly into the bedroom with steeply sloping eaves for walls.

Dale climbed into the old bed of his childhood that night and nestled into the blankets, allowing the weariness of the day to carry him off into slumber. As his mind drifted and sleep began to take hold, he was shocked back into full lucidity by the unmistakable sound of the door at the bottom of the stairs creaking open on its hinges.

In the darkness he lay there, straining his ears for any other sound. Had he just imagined it? Had a strange draft of wind been generated somewhere in the old house and caused the door to swing ever so slightly?

After a time, he concluded that it must have been nothing. Just as he was getting ready to dismiss the entire thing, he was jolted again by another unexpected noise: the loud creaking of a stair.  This was not his imagination! The fear level jumped inside him as he again, found himself straining his auditory senses to their maximum potential trying to determine what could possibly be the source of the noise. He listened for the sound of breathing or the dry whisper of clothing scraping on a wall. Anything. 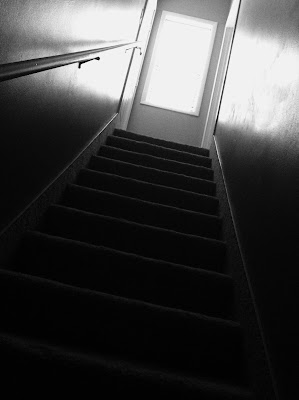 And sure enough, another stair groaned. This time it came from a stair further up the flight, and closer to the room where Dale now lay terrified in the darkness. There was the sense that someone was doing their best to sneak up to the room quietly, but being foiled by the squeaking stairs. Dale listened to this occur a few more times, each occurrence resembling how one might react after having a stair squeak underfoot: pausing for a long moment, then proceeding to creep upward.

After a time it got to the point where Dale knew that this visitor--whoever it was--must be close to the top of the stairs. In horror he fixed his eyes on the window just outside the bedroom door. The yellow glow of a streetlight shinning through it, weakly illuminated the entryway.

His heart pounding like a drum he watched in utter disbelief as the black, featureless form of a man was revealed, momentarily, when the figure glided past the window and into the bedroom.

Apparently, this final revelation was just too much for poor Dale's nervous system and his mind decided to check completely out of the situation. Dale fainted from fear. When he came to, he had no idea how long he had been unconscious. His unwelcome night visitor was gone.

He never was able to explain away the events of that night. There were no signs of a forced entry into the house and nothing had been stolen. When the figure had revealed itself for that brief moment in the streetlight shining through the window, Dale had not been able to discern any features that would have made the being identifiable in any way.

To this day that night remains a mystery in my family.

But, the story doesn't end there! It wasn't long after that my dad had his own frightening encounter in that same bedroom! Be sure to check back to hear the second part of the story. Or, follow my Facebook page so you know when part two is out.
If you are enjoying my blog, please consider signing up for my FREE Newsletter

Some images obtained through Google Images and are not my own.

If you have a personal story of the paranormal that you would like me to share on my blog please contact me at
bradylongmore@gmail.com I'd love to hear your story. You can remain anonymous if you wish.
Posted by Brady at 7:20 PM