An Uninvited Guest in The Idaho Rockies 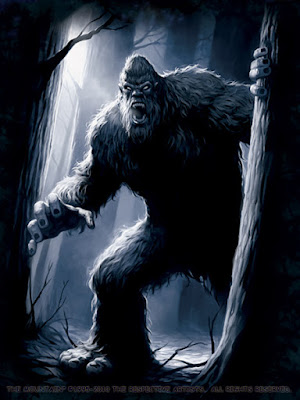 In this week's post I decided to switch gears a little bit. As much as I love a good ghost story, I'm also interested in other facets of the paranormal or the unknown. As far as legends and mysteries go, in my mind, Bigfoot is the supreme granddaddy of them all. In fact, I hope to write a novel around the subject some day--when I can conjure up a plot and a story that will do the subject justice. This isn't a ghost story, but in keeping with the theme of this blog, it is still a TRUE one. And it happened to me.

Now I imagine that most folks probably don't take the legend of Sasquatch--my preferred name for the creature--very seriously. Sure, it makes a great story around the campfire, but other than that, reports of sightings are mostly met with good-natured eye rolling at best, and outright ridicule at worst. The intent of this post isn't to try to convince skeptics or make a case for the existence of Sasquatch. The fact is, as fascinated as I am by the reports and stories of sightings, I'm not entirely convinced myself. That said, I WANT to believe!

The following really happened to me and some friends a few years ago. It's not proof of anything, but why don't you read for yourself, and then you decide.

It was the fall of 2011. A few years earlier, some childhood buddies and I had started the tradition of going on an annual backpacking trip together. Ironically--and half-jokingly--we refer to these trips as our annual Bigfoot hike. We joke with our wives that we are embarking on serious expeditions to locate the elusive cryptid. But, nothing out of the ordinary had ever taken place on these excursions. Until this particular year.

We were hiking in the White Clouds of Central Idaho, an outlying section of the famous Sawtooth Mountains. Our destination for that year was Walker Lake, a tranquil, blue mountain gem that lies in repose between soaring, jagged peaks.

This is a fairly remote location and given the time of year and the length of the hike, it was not considered abnormal that we had not encountered any other hikers that day on the trail. At the lake itself, there was only one other camp, aside from our own: an older gentleman--in his mid to late fifties--and two women. Based on the man's graying beard, wide-brimmed hat, fancy trekking poles, and khaki shorts, my friend, Jon, immediately dubbed him, the liberal. No offense to my more progressive friends and fans out there, but it was funny.

We made our camp near the lake's outlet, a crystalline trickle of ice cold water that tumbled down the valley, joining up with other small streams to form Little Boulder Creek. The liberal's camp was a few hundred yards away on the other side of the outlet. I have to take a moment here to describe the terrain of our immediate surroundings in order to properly convey what we experienced later the next night.

On one side of our camp was the lake, maybe twenty-five yards or so away. Behind us was a very steep hill, strewn with boulders, deadfall, and pine trees. The hill was steep, but not very high. I would guess about a thirty foot rise from where our tents were set up. At the top of the hill, the terrain leveled out into basically, a giant granite slab crisscrossed with big cracks, from which scrubby bushes and gnarled trees sprouted. If you were to climb the hill from our campsite, to your left would be a sheer cliff face a few hundred feet high, topped with boulders and trees.

Can you picture it now in your mind's eye? Good, I'll get on with the story. It was our second night camping by the lake and we found ourselves all alone, the liberal and his companions having hiked out that morning. The sun was down and the true darkness of night, that can only be experienced in the mountains, had fully settled in. But we had a good, comfortable fire going and were standing in the warm glow of its flickering, yellow flames, chatting and conversing, joking and laughing. Some of us were heating water in metal cups for hot chocolate.

It was the quintessential good times with good friends moment, when suddenly a loud crash shattered the relative peace and quite. All conversation and movement ceased amongst us as every eye went to the hill behind us. It sounded like a small boulder--about the size of a basketball in my mind--had fallen from the sky to smash onto the big slab of granite above and behind us.
We all looked at each other, mutual expressions of curiosity and concern on each face, some of us silently mouthing, what the ... as our minds raced with possibilities. We listened and kept our eyes peeled on the shadows dancing among the trees along the perimeter of our campfire's limited glow. After some discussion and some nervous shining of flashlights into the dark surroundings we determined that a large rock must have somehow fallen from the cliff to land on the shelf of rock below. Although, I do remember thinking to myself that if that were indeed the case, the rock had somehow managed to fall at a forty-five degree angle. 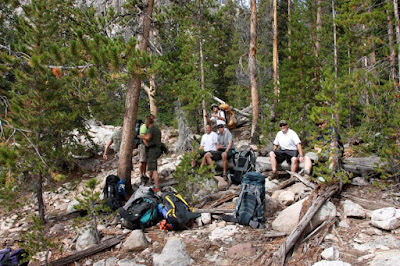 After a few minutes, we shrugged it off, light-hearted conversation eventually picking back up. Or perhaps, if I was getting my way, the telling of spine-tingling ghost stories had resumed. Either way, the moment was interrupted once again by the identical noise. I'm telling you, this was loud. A great, singular THUMP, and most definitely the sound of stone colliding upon stone.

Once more, we froze. Then flashlights clicked on, bright LED beams stabbing into the darkness as we strained with our ears for any other accompanying sounds. Once again, the sound had come from behind us, up and over the hill. I imagined someone ... or something up there, peering down at us from the blackness above. I even admit that more than one firearm was made readily available at this point.

It took a little longer this time for the moment to pass, but eventually it did and once again we dismissed the incident. A few more logs were fed to the flames, we huddled in a bit closer to the fire, and did our best to resume normalcy by picking our conversation back up where it had left off.

I actually couldn't believe it when a third crash resounded off the nearby granite cliff walls and reverberated across the still, black surface of the lake. A third time! I guess there's some truth behind the saying, third time's the charm because there was just something about this third interruption that said to me that, this was no coincidence of falling rocks or some other naturally explainable event. Somebody was up on that hill purposely screwing with us! I think we all reached this same conclusion at that time.

But, I think another reality weighing on all of us--that had no need to be spoken aloud--was our utter isolation in the area. That, combined with the fact that it was nearly midnight, made it highly unlikely that it was a someone screwing with us and more likely a something!

I remember at that point saying something to the group along the lines of, "We are men, for crying out loud. We are the dominant species on this planet. Let's all charge up that hill and let, whatever it is up there, know that it can't mess with us like this!" And so we formed a line and ran up the hill, our flashlights darting in every direction. I don't recall a battle cry, but there could have been one just the same.
We found the top of the hill to be void of any person or creature. Whatever had been causing the noise had made its fast escape from our impromptu charge. We returned to camp never to be bothered by the strange crashing noise again. Which confirmed to us that we had probably chased something or somebody away and it had chosen not to return.

To this day I wonder what it was. I'm fairly convinced that it's highly unlikely it was a person. We were almost literally the only ones on the trail that weekend. We saw no other people on the way up or down the trail--except for the liberal, of course. But even he was gone at this point. Also, we were miles from any roads or other suitable campsites. A person would have had to have hiked in complete darkness through very steep and rugged terrain for miles just to mess with us. And in Idaho it's reasonable to say that he would be at considerable risk of getting himself shot! It just seems far-fetched that it could have been a person. But at the same time, whatever it was must have had the ability and level of thought process to purposely distract us by throwing small boulders near our camp.

So where does that leave us? Well, you tell me.

Sasquatch image obtained from Pinterest and does not belong to me.

If you have a personal story of the paranormal that you would like me to share on my blog please contact me at bradylongmore@gmail.com I'd love to hear your story. You can remain anonymous if you wish.
Posted by Brady at 9:47 PM